By Heather McCabe and Emi Sasagawa posted on November 3rd, 2016

In an effort to customize materials for their courses and save students money on rising textbook fees, instructors in the Math department at UBC have adopted open or freely accessible textbooks in all first-year courses and most second-year courses.

Since 1997, the widespread adoption of open or freely accessible resources in the department has impacted more than 23,000 students and saved them between $1,315,000 and $2,429,000 on commercially available textbooks. While some math instructors began developing their own online textbooks in the late 90’s, most of the activity has taken place in the last five years. This fall, instructors in five math courses replaced a required, traditional textbook with open resources.

In the 2016 academic year, instructors in 16 math courses have adopted open or free textbooks. 7,000 students are enrolled in these courses so far this year, and collectively they are saving between $608,000 and $1,024,000. (These estimates are based on a formula suggested by OpenStax, a non-profit based at Rice University that publishes openly licensed textbooks, to take into account students who buy used textbooks, rent them or buy new textbooks. BCcampus, which manages the B.C. Open Textbook Project, also uses this method for calculating student savings.)

In addition to the open or freely available textbooks, faculty members use a number of other freely accessible or open resources, such as WeBWorK, a randomized online homework software that automatically grades student work; the Math Exam/Education Resources wiki with past exams and worked out solutions and videos; and course wiki pages which host additional resources. In some cases, students have helped with the production of the online textbooks written by faculty, and contributed to WeBWorK problems and the course wiki pages.

Customizing the content to fit the courses and, in some cases, developing courses that are more suited to students in a particular field of study, have been main motivators for instructors who have written their own online textbooks. Leah Keshet, a professor in the math department, along with her colleagues, Bill Casselman and David Austin, developed two calculus courses in the 90’s for students interested in biology. The instructors began writing online course notes, which they used instead of a textbook. “The three of us felt that the calculus which was then taught was not really suitable for life science students, and we basically wanted to do it in a slightly different way,” Keshet said. “During the first few years [the course notes were] essentially a few online notes supplemented by labs that we created ourselves, but as the technologies improved, as YouTube has become current and as it’s been much easier to post things like PDF files, gradually the website that we had evolved to having course notes.”

Eric Cytrynbaum, an associate professor in the department, has coordinated one of the courses that Keshet helped develop, Math 102: Differential Calculus with Applications to Life Sciences, for the last five years. “I never actually thought of what we’re doing as developing open resources. I just thought, these students are paying $200 for a textbook, and the textbooks don’t even really cover the stuff that I really am trying to push in the course, which are the applications and modeling. So it’s more frustration with what’s available than an ideological standpoint.” 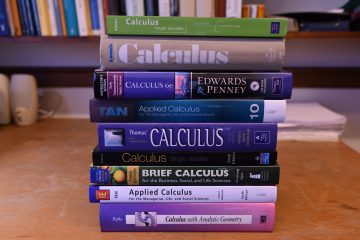 Cytrynbaum also brings examples from his research into the course by adding supplements to the course wiki. “I can actually talk about things that come up in my research when we have this home written set of course notes. Maybe that’s a way of improving what we bring as a research university to our students.”

Several Math instructors cited a frustration with the high costs of textbooks. The average cost of the traditional textbooks that instructors in the department replaced with free or open textbooks is around $185, and it’s not unusual for a math textbook to cost $200 or more.

Three years ago, the company that publishes the book that instructors previously used in Math 100/180 and 101, the standard first-year calculus courses, switched to a new edition and raised the price of the textbook. Andrew Rechnitzer, a professor in the department who coordinates the courses, explained that that’s what prompted him and his colleagues, Elyse Yeager and Joel Feldman, to turn their own notes for the course into an online textbook that they could use.

“That’s really what precipitated it was when the publisher…went from the 7th edition to the 8th edition with no obvious improvements and very minimal changes, and the price would have been really quite ludicrous, for one, and for what the students were getting, say, over the third edition, which would have been $20 resale,” Rechnitzer said. “That’s what really pushed me in that direction.”

Feldman said that a number of textbooks could have been used for the course. “There are a lot of commercial calculus textbooks, and you have to be an expert to tell the difference between them. Any one of them could be used as effectively as any other.” Now, in addition to their own textbook, the instructors point to three other open textbooks that students can use.

Keshet, herself, has written a traditional textbook, Mathematical Models in Biology, which was published in 1988. “That sort of taught me that dealing with publishers can be a little bit problematic, because with my first book, the publisher essentially did nothing other than increase the price every year, which was disconcerting,” she said. “This way, I feel that I can reach the students more easily and also change it on the go. So if one year I find that examples that were done previously were not particularly good, or I want to rearrange them slightly, I can do it.”

Keshet’s published textbook is written for third and fourth-year undergraduate or beginning graduate level courses. Regarding the online textbook she developed for her first-year courses, Keshet said, “I, myself, am a mathematical biologist, so I’m very interested in applications of mathematics to biology, and so it’s very natural and appealing to me to think up examples that would work at a first-year level. And so, I felt compelled to write them down. Coming up with the simplest possible examples of how math could be useful in the life sciences is a wonderful challenge, and I’m still finding great new examples and being very excited by them, and that’s really my motivation.”

Mark MacLean, a faculty member and undergraduate chair in the Math department and president of the UBC Faculty Association, said that the efforts in the department have focused not just on cost, but also on the benefits to student learning. “We feel like, in certain courses, that we don’t need one of these expensive textbooks to support student learning to the level we know we can,” he said. “And we’ve said, even Math 102/103 is a 20 year example. Students have come out of that course and done very well, and the materials fit the course very well, and we’ve done well by students with that…We have to make sure that if we choose to build these resources to understand what they are and how they affect student experiences in learning.”

Students who have taken Keshet’s course cite affordability and access as benefits of having a free, online textbook. Lydia Chen, now an assistant professor of chemistry at McMaster University, took Keshet’s course in 2002. “We have to pay an exorbitant amount to get into university, and on top of that we have to pay $200 for a textbook. With open textbooks students will still be able to have the learning experience. I think that’s what the student needs.” 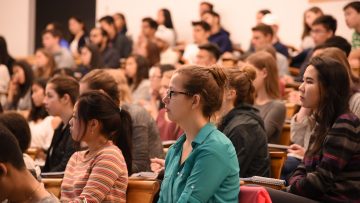 Yuejun Guo took Math 102 last year with Keshet. Guo said she appreciated the fact that the online textbook was written by the professor, so that it prepared her for what they would cover in the lecture and the problems that they would have to work on after the lecture. “It is more closely linked to what we are going to learn,” she said. “Another point is that all the math materials are on one website, so you don’t need to come to several websites to find the information you want. I feel it’s more efficient in this way. It saves you time and money, so I would really love to have more courses like that.”

The Alma Mater Society (AMS) at UBC has also taken up the issue of textbook affordability and launched their #textbookbrokeBC campaign last year. The AMS hopes to promote the use of open textbooks and other open resources on campus.

Kevin Doering, associate vice president academic and university affairs at the AMS, said there are three main benefits to using open textbooks and open educational resources. These include affordability, equal access to textbooks without barriers, and quality of content since open textbooks and materials can be customized to a course. Referring to data from the 2016 AMS Academic Experience Survey, Doering said 75 percent of students surveyed have gone without a textbook or other course resource due to cost, and 37 percent do this frequently or often.

In the coming weeks, Doering and representatives from the Centre for Teaching, Learning and Technology and the UBC Library will be talking to course coordinators and faculty members who teach high enrolment courses—courses with more than 900 students—to see what the barriers are to adopting more open textbooks and resources.

“Once we know what the barriers are to adoption of open educational resources, we’re hoping to provide solutions specific to UBC to make it easier for faculty,” Doering said.

Faculty members in Math who have written their own online textbooks say that they plan to continue to refine them or add features to them to make them more interactive and appealing for students to use. 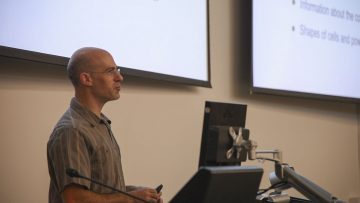 According to Keshet and Cytrynbaum, one of the issues that they’ve encountered with their students is that some have a hard time reading through the technical material in traditional textbooks and in their course notes. Because of this, they would like to develop more links in their course notes to the videos and homework problems, as well as create more videos that explain concepts.

Keshet said that she’s noticed that the introduction of videos, along with clicker questions and two-stage quizzes, where students take a portion of a quiz on their own and then come together into groups to finish the quiz, has been particularly effective with her students.

“Teaching by the old chalk talk method is not very conducive to enthusiastic learning,” she said. “That’s why I’ve gone into these. It does take a lot of time, but I think it’s worth it. And judging by the students’ reactions at the end of a course, and the fact that they come and say, ‘This was really unique. I really appreciated it.’ It makes it worthwhile.”