Unlike many, if not most, in the digital learning community, I stumbled into it more or less by accident. About a year ago I was approached by the Deans and asked whether or not I would be interested in applying to develop a lecture course I’ve long been teaching at UBC, Asia/Phil 371 “Foundations of Chinese Thought,” as one of UBC’s first humanities MOOCs.

I had already been planning to revamp the course, for a couple of reasons. One was simple boredom: having taught the course in essentially the same form for almost ten years I was ready for a change. I’d also just published my first trade book, Trying Not to Try (Crown/Random House, 2014). This book drew on much of the material covered in 371—early Chinese religious and philosophical thought—but viewed it through the lens of modern evolutionary theory and cognitive science, as well as making numerous connections to everyday contemporary life. Although the main purpose of Asia/Phil 371, unlike a trade book, is to give students a rigorous, academic grounding in early Chinese thought in its cultural and historical context, it seemed to me that bringing in these various practical and contemporary connections would help students relate to the material.

So my response to the invitation to submit a proposal was, Why not? Seems like it would be fun, and how hard could it be?

Anyone who has ever prepared a MOOC, or known someone who has, can imagine the shock that I was in for. What I thought would be a fairly leisurely three-month preparation period turned into six months of grueling, fulltime work. We not only failed to finish the MOOC production before the class began running, we actually never really finished, managing only to stay a week ahead of the students, paying through the nose for expedited transcriptions and pulling many an all-nighter. My team of three had to expand to eight in order to keep up with the workload, and we went wildly over budget. My main production person, who did all of the filming and much of the editing, acquired a sickly pallor from spending months indoors sitting in front of a computer screen. It was not what I’d envisioned at the outset.

Fortunately, the human memory system has been designed by evolution to enhance survival and the passing of genes from one generation into another, rather than accuracy per se. If parents who have suffered through the sleeplessness and stress of raising an infant could continue to remember that experience with perfect clarity, it’s likely that few would go on to have more. In the same way, having recovered from the MOOC production process, I am now capable of viewing the process of preparing and teaching a MOOC bathed in a rosy glow, or at least through a comforting fog.

I’m very happy with the product, (China 300x) Chinese Thought: Ancient Wisdom Meets Modern Science, and the feedback from students and colleagues has been overwhelmingly positive. Moreover, with a bit more perspective, I am now in a better position to appreciate all of the truly wonderful things about the experience.

To begin with, I have never had a more interesting and diverse group of students. They came from 132 countries, a large proportion of them had advanced degrees, and their engagement in the course material was amazing. Perhaps people who have experience teaching adult classes can relate: there is something different about having experienced, thoughtful students who are in the class purely because they want to be, and who are expecting—indeed, demanding—to get something intellectually substantial out of it. This did create some problems. For instance, I had to play a much larger role than expected in monitoring and replying to the discussion board, simply because many of the questions were too complicated or difficult for the TAs to handle. (Many were too complicated or difficult for me to handle!)

In terms of my ability to convey the course materials in an engaging and effective manner, the MOOC platform is far superior to a traditional classroom in many respects. As annoying as the multiple takes required to produce a finished video were (probably four to five hours of filming for one hour of usable content), the result was a conciseness and rhetorical effectiveness that would be impossible to obtain consistently in a live lecture. I was able to overlay images and captions and videos to enhance the listening experience, making the lectures more information-dense but simultaneously more entertaining and comprehensible. Interviews with colleagues at UBC and beyond not only broke up the tedium of students having to listen exclusively to my voice, but also allowed them to benefit from a deeper and more diverse pool of academic expertise.

Having a semester’s worth of pre-recorded lectures now at my disposal also allows me an extraordinary degree of pedagogical flexibility. When I return to teaching Asia/Phil 371 at UBC, I plan to draw upon these videos to try out a “flipped classroom” format. Rather than having 100 students show up three times a week to hear me lecture for an hour, the class will be broken up into three sections, each meeting only one hour a week. In this hour, I can lead the 30-some students in more intimate discussion sections, engaging with the course readings, fostering debate about class themes, and answering questions and concerns much more effectively than would be possible in a large lecture hall. During the other two class hours they would normally spend in my large lectures—where many of them end up drifting off to check e-mail or the latest YouTube cute cat video—students will be required to watch the pre-recorded videos, with weekly quizzes at the beginning of discussion section encouraging compliance. The result, I am hoping, will be a greatly enriched learning experience for everyone.

All in all, creating and teaching a MOOC has been an extraordinary experience, and I look forward to seeing how the course develops as we teach future iterations. 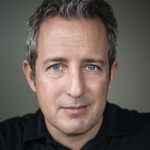 Edward Slingerland is a professor of Asian Studies at UBC.
Photo by Paul Joseph.